Can’t help myself really, and now I probably shouldn’t be driving too far from the nearest maternity ward, I’m conducting conversations with crochet in the comfort of my own home. They’re really quite educated, and have some interesting opinions on the current US election campaign… 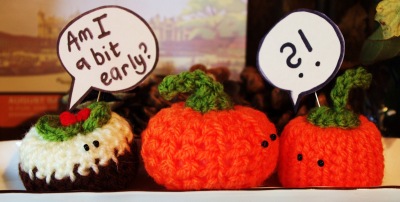 Anyway, the mini puddings are just a development of the pumpkin pattern I recently posted (still have two looking for homes, and I’m worried about how they’ll take the news on Thursday that they are somewhat surplus to requirements…). Just crochet half-and-half brown and white, adding two green mini circles (ch4, jn with slst, dc around, jn with slst) and a couple of red french knots for berries on the top.

If you want to indulge in complete festive tackiness, the phone holder is super-simple:
Measurements depend on the size of your phone, or even go large with an iPad version… 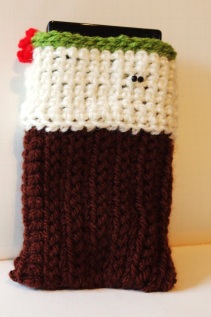 Chain enough brown and white to cover the length of your phone/device plus a couple of stitches over, at a ration of two-thirds brown and one-third white.

Alternate rows of single and double crochet for a tight weave and chunky finish. Keep going until you have just enough to wrap around your phone snuggly (you want it to stretch a little to hold it securely). Cast off.

Using the tail, sew up the bottom and sides (I put the seam in the middle at the back just because it’s a tad neater).

Join in green (to represent the holly) at the top and go around in single crochet twice. Fasten off and work in loose ends. Add three red french knot berries to the side…bit jaunty that.

Add two beady eyes if you fancy conversation, or omit if you want to pretend this could in any way be a chic example of modern design.

View all posts by jenbeaton

The Other Mrs Beaton

The Art and Craft of Blogging

The latest news on WordPress.com and the WordPress community.